Although network address translation occurs at the Internet gateway, there are two other resources that can also perform NAT.
– NAT gateway
– NAT instance AWS calls these NAT devices.
The purpose of a NAT device is to allow an instance to access the Internet while preventing hosts on the Internet from reaching the instance directly. This is useful when an instance needs to go out to the Internet to fetch updates or to upload data but does not need to service requests from clients. When you use a VPC Network Address Translation device, the instance needing Internet access does not have a public IP address allocated to it. Incidentally, this makes it impossible for hosts on the Internet to reach it directly. Instead, only the NAT device is configured with a public IP. Additionally, the VPC Network Address Translation device has an interface in a public subnet.
Refer to Table 4.7 for an example.

When db1 sends a packet to a host on the Internet with the address 198.51.100.11, the packet must first go to the NAT device. The NAT device translates the packet as follows:

Refer to the diagram in Figure 4.2 to see the relationship between both of the route tables. Recall that a route target must be a VPC resource such as instance, Internet gateway, or ENI. The specific target you choose depends on the type of NAT device you use: a NAT gateway or a NAT instance. 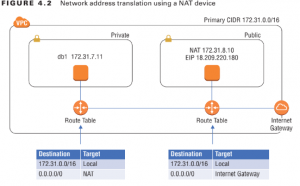 A NAT gateway is a NAT device managed by AWS. Like an Internet gateway, it’s a one size-fits-all resource. It doesn’t come in a variety of flavours, and there’s nothing to manage or access. It automatically scales to accommodate your bandwidth requirements. You set it and forget it. When you create a NAT gateway, you must assign it an EIP. A NAT gateway can reside in only one subnet, which must be a public subnet for it to access the Internet. AWS selects a private IP address from the subnet and assigns it to the NAT gateway. For redundancy, you may create additional NAT gateways in different availability zones. After creating a NAT gateway, you must create a default route to direct Internet-bound traffic from your instances to the NAT gateway. The target you specify will be the NAT gateway ID, which follows the format nat-0750b9c8de7e75e9f. If you use multiple NAT gateways, you can create multiple default routes, each pointing to a different NAT gateway as the target. Because a NAT gateway doesn’t use an ENI, you can’t apply a security group to it. You can, however, apply a NACL to the subnet that it resides in.

A NAT instance is a normal EC2 instance that uses a preconfigured Linux-based AMI. You have to perform the same steps to launch it as you would any other instance. It functions like a NAT gateway in many respects, but there are some key differences. Unlike a NAT gateway, a NAT instance doesn’t automatically scale to accommodate increased bandwidth requirements. Therefore, it’s important that you select an appropriately robust instance type. If you choose an instance type that’s too small, you must manually upgrade to a larger instance type. Also, a NAT instance has an ENI, so you must apply a security group to it. You also must remember to assign it a public IP address. Lastly, you must disable the source/destination check on the NAT instance’s ENI. This allows the NAT instance to receive traffic addressed to an IP other than its own, and it also allows the instance to send traffic using a source IP that it doesn’t own. One advantage of a NAT instance is that you can use it as a bastion host, sometimes called a jump host, to connect to instances that don’t have a public IP. You can’t do this with a NAT gateway. You must create a default route to direct Internet-bound traffic to the NAT instance. The target of the default route will be the NAT instance’s ID, which follows the format i-0a1674fe5671dcb00. If you want to guard against instance or availability zone failures, it’s not as simple as just spinning up another NAT instance. You cannot create multiple default routes pointing to different NAT instances. If you need this level of resiliency, you’re better off using NAT gateways instead.

Notice that the routes are mirrors of each other. Again, this is to allow traffic in both directions. The destination CIDR doesn’t need to exactly match that of the destination VPC. If you want to enable peering only between specific subnets, you can specify the subnet CIDR instead. Inter-region VPC peering is not available for some AWS regions. Peering connections between regions have a maximum transmission unit (MTU) of 1500 bytes and do not support IPv6.